​“Shooters shoot” and other cornhole jargon 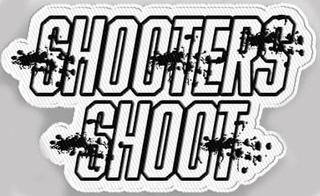 I asked Austin Reynard: Founder of Killshots Cornhole for his definition of what "Shooters Shoot" means to him. His response was “Shooters Shoot- to me is having enough confidence to be willing to take risks on yourself and thrive off the pressure.” This one term you will often hear called out in your local and league play tournaments. It may be the most well known phrase in the cornhole world as well.

If you don’t want to sound like a total newbie when you step up to pitch your bags, take a quick walk through these easy to remember slang words and definitions. This is a compilation of terms from across numerous articles, leagues and groups. Some people across the country refer to cornhole bag as bean bags (there will be a article on that later), so if you see bean bags, please understand that the terms are interchangeable for the sake of understanding terminology from different regions.

Stayed tuned for more articles from different parts of the country. If you have an interesting story or article to share and would like for it to be featured on the Killshots Blog, send your story or article to: michael.ac.vigil@gmail.com

Ace – One point for a bag landing on the board

Air Mail – This occurs when a player pitches bag straight through hole without touching the cornhole board, this is called air mail., much like a swish in basketball. Typically this is when you will hear “Shooter Shoot” being yelled by the best and worst of them.

Back Door – A bag that flops, rolls, hooks around or airmailed and into the hole for 3 points.

Backstop – A bag that lands on the back of the board immediately behind the hole. You can use that bag with a hard push or backboard airmail. Use that bag to your advantage.

Blocker – When a bag lands in front of the hole this is called a blocker. This is traditional cornhole defense.

Cornfusion – When two players or teams cannot agree on the score in any one particular inning.

Cornhole – 3 points from making it in the hole. Pretty simple right?!?!

Corn Patty – A bag than is not thrown with enough force and lands short of the cornhole boards.

Four bagger – When a single player gets four bags in the hole in a single round – a real feat!

Cow Pie – You receive a cow pie, one point, for having a beanbag land and stay on the board.

Dirty Bag – Occasionally a bag hits the ground first before bouncing or rolling up onto the cornhole board, resulting in a dirty bag. Also, a dirty bag can occur when a bag first hits the board and then partially slides off with some of the bag touching the ground. When either of these dirty bags occur, no points are given for the toss.

Dirty Roll Up – When a bag first hits the ground before “rolling” up onto the board. No points are awarded for this toss.

Double Deuce – When a single player gets four bags in the hole in a single round – a real feat! There are many other terms for this as well, continue reading to learn of them.

Double Stack – While most throw styles are allowed in tournaments, the double stack is not, but it is still fun for backyard play. The double stack is accomplished by stacking two beanbags on top of each other and simultaneously tossing them at the cornhole board.

Drain O – A beanbag that is tossed and goes into the hole is called a drain-o. This results in 3 points for the player or team that tossed.

Fault – When a foot has stepped past the front of the corn hole board or other predetermined throw line.

Fling – Some players like to hold the beanbag by one corner between their index finger and thumb and simply “fling” the bag with a flick of the wrist.

Flop – When a bag is tossed in cornhole and there is no spin or rotation during its flight, this is referred to as a flop.

Four bagger – When a single player gets four bags in the hole in a single round, the most common term used when this occurs.

Frisbee – This type of throw has the beanbag spinning in the air like a frisbee in order to help it “stick” to the board when it lands.

Hammer– The last bag tossed each round or inning is sometimes referred to as the hammer.

Hanger – Term for when a bag lands on the board and is partially hangingover the lip of the hole. This is called a hanger and it does not receive the 3 points unless it falls all the way in.

Honors – A team is given honors for the next inning and gets to toss first when they were the last to score in a previous game/inning.

Hooker – A bag that hits the board and slides in a hook or curve going around another “blocker” bag and into the hole.

Jumper – A bag that hits another bag already on the board and causes it to “jump” into the hole.

Jump Shot – In cornhole, a jumpshot is made when a player jumps and “shoots” the bag at the hole like in basketball.

Knuckleballer – Throwing a beanbag in cornhole, just like you would throw a knuckleball in baseball.

Light ’em Up – The popularity of the cornhole lights for nighttime play has really grown in the past few years. This phrase is one to signal it’s time to turn them on.

Lipper – A bag that is on the board, halfway hanging into the hole, but not all the way through to gain the 3 points.

Make Them Glow – The popularity of the corn hole lights has really grown in the past few years. This is another phrase signaling it’s time to turn them on!

Police or PoPo – Cornhole score keepers or tournament officials are often referred to as da police.

Push Bag – When a single tossed bag either pushes or pulls two or more other bags already on the board into the hole.

Rim Job – Sometimes a bag will look like it is going to go in, but then it hits the side or lip of the hole and bounces out and onto the ground.

Shooters Shoot- There are many variations for this term, but it means, take the Shot if you are feeling it.

Shucked – This refers to a player or team that has beaten 13-0, for those that play past the 11-0 skunk. Common in backyard and tailgate games. Not allowed in tournament play.

Shuck – When a bag is tossed and hits another players’ bag, knocking it off of the board, this is called a shucker. Oh, shucks!

Skunk – A skunk occurs (and the game is over) when one team or opponent reaches 11 points and the opposite team has 0 points. Common in backyard and tailgate games. Not allowed in tournament play.

Sky bag – When a bag is tossed really high and lands far beyond the cornhole board, it is called a sky bag.

Slick Woody – Like a slider, the tossed bag hits the board below the hole and simply slides up and into the hole for 3 points.

Slider – A beanbag that is tossed, hits the board further down from the hole, and slides up the cornhole board and into the hole.

Toss Away - A player may do this when an opponents bag on the board is close to falling and they do not want to give up any points, so they will purposely throw the bag away from the board.